I do not like the word ‘bonding’, but I can’t think of a better one, dammit, so it’ll have to do.

I think it’s obvious to anyone who reads here regularly or follows me on social media or who puts together my online grocery order that I had some trouble bonding properly with Ada. Of course I’ve always loved her intensely, and she wants for nothing at all, but I guess I struggled to feel like we were mother and daughter rather than, say, oddly-matched flatmates or an experimental jazz duo making an epic Twinkle Twinkle concept album. My friend Lise described her love for her baby as feeling like romantic love, but I initially felt it more akin to Stockholm Syndrome; compelled to stay with this tiny crazy person when all sanity would suggest running for the hills at the earliest opportunity.

Now, almost nine months in, we’re best buds and she’s completely mine, as I am hers. We make each other laugh, I teach her stuff, I make decisions for her, she hugs me with her tiny hands; it’s all good. But if, like me, you’re struggling with your new person, here’s the stuff that helped me along the way:

Ada got lots of beautiful clothes when she was born, and I was so grateful for all of them. Even now, I love it when she gets something pretty in the mail from Grandma or a bag of cool hand-me-downs from friends – I’m really not complaining, it’s ace.

This did, however, intensify the feeling of her being a little stranger who arrived with her own wardrobe. The first time I bought her clothes other than vests and socks was this Mother’s Day, when Chris gave me Baby Boden vouchers. Once I put her in the little mini-me jeans and jumpers I’d picked, I suddenly thought ‘Oh, she looks like me! She’s dressed like me! Hello, child o’ mine!’

Simple! Why didn’t I think of it? Once the adult acne and myopia sets in we’ll be like twins… poor Ada.

Given that I didn’t conceive easily, didn’t birth easily and didn’t feed easily, it’s no wonder that I took to infant motherhood like a cat to water.

When I stopped comparing myself to blissed-out pals who got pregnant quickly, breastfed like champs and didn’t spend the first two weeks of their children’s lives feverishly hallucinating that the walls in their flat had moved, I felt a lot better about everything.

Like many new parents, I’ve found ‘helpful’ advice to be at best slightly annoying and at worst the terrifying gateway to weeks of tearful self-doubt.

These days, though, I’m pretty confident that I know Ada better than anyone. I know when she needs to sleep and when she’s frightened or frustrated or hungry. I know that I will always, always go to her when she cries, and that’s not something to apologise for when the 1950s school of ‘It’s Good For Their Lungs’ comes to visit.

Having your decisions constantly questioned is exhausting, but now I feel bold enough to say ‘It’s okay, I know what she needs right now,’ family visits are a million times easier. I don’t argue or justify, I just say it:

‘It’s okay. I know what she needs right now.’

I hate taking the baby to cafes; it’s a massive logistical hassle and she’s weirdly terrified of the changing tables. I’d rather bring cakes and coffee home and enjoy them while she throws herself around on her playmat.

It’s taken me NINE MONTHS to admit this. I’m forever making excuses to friends who want me to drag the pram into some poky coffee shop, usually at a time that interferes with a nap or an explosive poop.

Now I just say it; I don’t enjoy wrangling the baby in cafes! I don’t want to watch a film at the baby cinema with lots of other whinging babies! I didn’t do yoga before and I’m certainly not going to do it now! IT’S ALL FINE!

It’s a massively liberating and, I’m sure to your mind, completely mad revelation. I don’t have to do the stuff I don’t enjoy. Ada has plenty of fun, none of it involving a stressful battle of wills over whether or not she gets to eat a packet of Splenda. Phew. 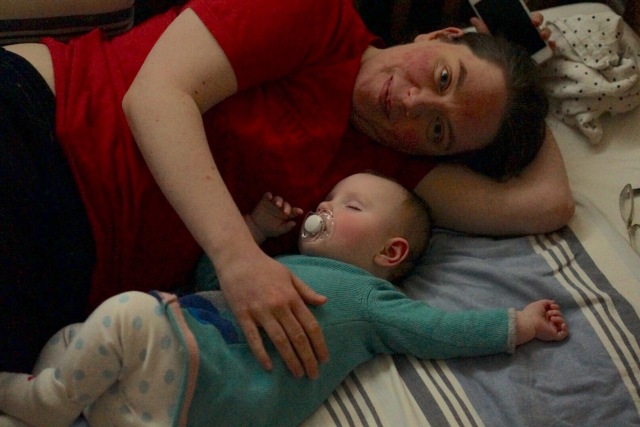 This entry was posted in Baby, Uncategorized. Bookmark the permalink.

1 Response to The B Word